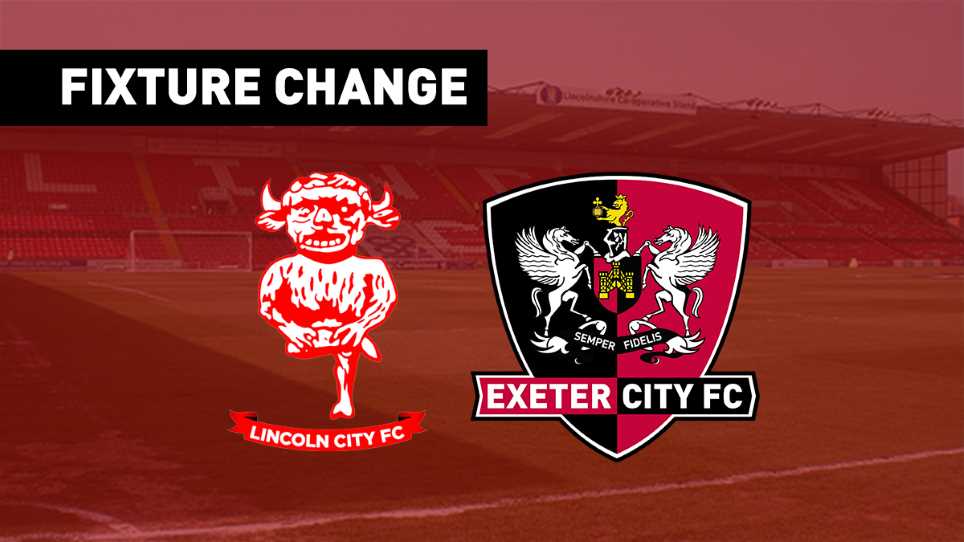 
Exeter City's match away at Lincoln City has been moved to Friday, March 30.

Exeter City fell to a 3-2 defeat against Lincoln City at Sincil Bank in Sky Bet League Two on Good Friday.

In an exciting encounter, the Grecians took the lead through Jayden Stockley after 10 minutes before they were pegged back by Danny Rowe's low header.

Lincoln then went ahead just moments after the restart through Matt Green's low finish but despite City levelling through Jake Taylor and hitting the woodword multiple times, Ollie Palmer stepped up to seal the win for the Imps.

City boss Paul Tisdale made two changes to the side that beat Swindon Town last time out as Lloyd James, and Luke Croll came into the starting XI as the Grecians looked to make it three consecutive wins.

Lincoln created the best chance of the opening 10 minutes when they played a delicate free-kick into the path of Danny Rowe, but with only Christy Pym to beat, he mishit his shot as the Grecians’ keeper collected.

Moments later, City would break though, as Lloyd James was fouled on the edge of the penalty area. Stockley then stepped up to take the free-kick and hit a dangerous attempt which was saved low by Ryan Allsop.

From the resulting corner the Grecians went ahead as Stockley found himself unmarked in the Lincoln box to guide his header superbly into the far corner and put Tisdale’s side a goal to the good.

Lincoln then had a good chance just before the 30-minute mark when a dangerous corner aimed at Matt Green caused a scramble in the City box, before Stockley and Dean Moxey managed to clear the ball between them.

A few minutes later the Grecians created a good opening when tenacious work from Hiram Boateng out wide saw him cross for Taylor, who laid the ball into the path of James, but his effort from the edge of the box was blocked well by the Lincoln defence.

Rowe went close again for the home side when a cross took a wicked deflection off of James before falling kindly for the Lincoln number 24 as he volleyed just over Pym’s goal.

An exciting end to the first half saw both sides go close to scoring, firstly the Grecians who were inches from doubling their advantage when Stockley latched onto a cross from the left before volleying against both of Allsop’s post before the goalkeeper scrambled to collect the ball.

Lincoln then went up the other end as Green received the ball from a chip forward, but credit to Pierce Sweeney who intervened and cleared the ball before the Lincoln striker, who only had Pym to beat, could get a shot away.

The home side started the second-half the more likely and created a good chance on 57 minutes when Scott Wharton got on the end of a corner at the back post and headed at goal, but for a vital clearance from Sweeney who swept the ball away.

And that Lincoln pressure began to tell when they levelled through Rowe after Pym saved an initial shot but was unable to prevent the forward from nodding the ball in from close range.

It was to get worse for the Grecians just a couple of minutes later when another free-kick saw Green dart down the right in space, before he converted through the legs of the City keeper.

Boateng almost hit an instant reply for City when he cut inside from the right before shooting left footed just over Allsop’s goal.

Lincoln then almost had a third shortly after when a deep cross came in and despite countless Imps bodies attacking the ball, somehow it stayed out as Jordan Tillson made a vital interception on the goal line.

The Grecians then had two chances in quick succession when Taylor helped a corner back into the box, before Jordan Storey struck the post and Stockley had the rebound blocked for another corner.

A couple of minutes later City were back in it when good hold-up play from Robbie Simpson eventually saw the ball laid to Taylor on the edge of the box and he placed an excellent effort inside the far corner to make the score 2-2.

In what was a thrilling contest, Lincoln had the ball in the net again just seconds after the restart when substitute Palmer nodded the ball in amongst a crowd of bodies, but thankfully for City, there appeared to be a foul in the build-up as the goal was chalked off.

More aerial pressure came the Grecians’ way as Cowley’s side looked to go ahead again, and they did so when a cross found Palmer at the back post, and he was on hand to fire past Pym to put the home side back in front.

In six added minutes, City had a good chance to level again when Stockley rose well to meet a corner, but for Allsop who collected comfortably in the end as the Grecians slipped to defeat.


Exeter City's match away at Lincoln City has been moved to Friday, March 30.

Tickets for Exeter City's trip to Sincil Bank to face Lincoln City on Friday, March 30 (3pm kick-off) have SOLD OUT.

The club was given an allocation of 400 tickets, which sold out on this afternoon (Wednesday, March 28).

Tickets purchased but not collected will be available to collect at the ticket office at Sincil Bank. Please note that Lincoln are expecting the ticket office to be busy on Friday with their being a large gate. If you can, please collect from St James Park before 5pm tomorrow.

Thank you for your support!