Exeter City travel to the PTS Academy Stadium to face Northampton Town on Saturday, on the back of three straight wins in EFL Sky Bet League Two.

Northampton come into the match on the back of three straight league defeats, but City manager Matt Taylor knows what threat they pose ahead of Saturday's match. "They are a really strong team at this level." said Matt.

"We found how difficult it was to go to Northampton at a similar stage last season where we were out of the game in the first half hour. We have to start the game well, and aim for a constant performance and play when it's on to play." 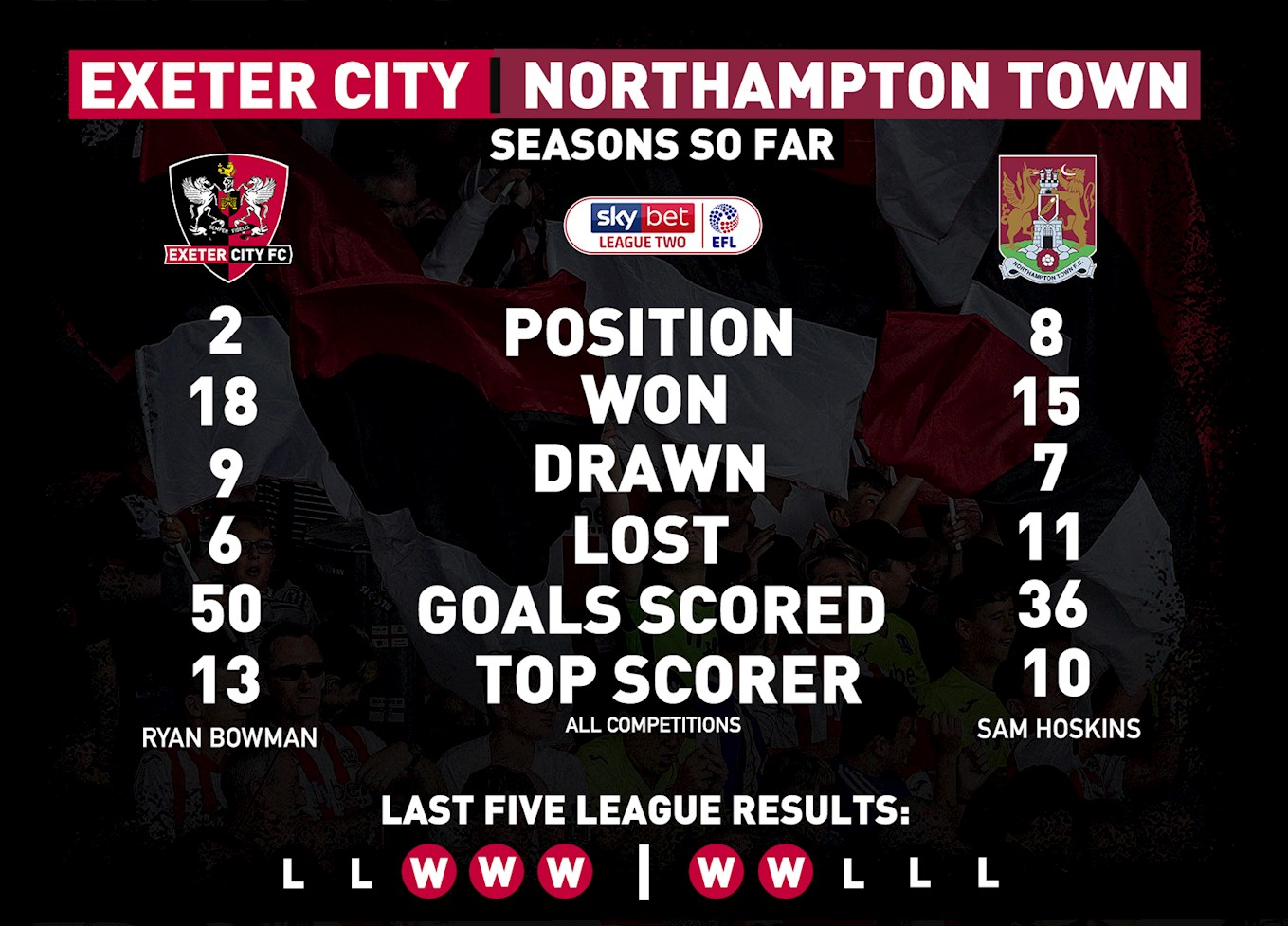 Northampton come into the match on the back of three straight defeats in the league and sit in eighth place, level on points with Colchester United, who occupy the final play-off spot.

Walsall stunned Northampton in coming from two goals down to take all three points.

A rapid second-half riposte with goals from Aaron Martin and Alex Fisher saw Exeter City come from behind to beat Northampton Town 3-2 at St James Park.

The stadium was completed in October 1994, the first match took place on October 15 against Barnet.

The stadium has also been known as Sixfields Stadium and can accommodate in excess of 7,700 seated spectators, with provisions for the disabled. Visiting supporters are situated in the Moulton College South Stand.

To avoid a number of changes, perhaps the best train to take on the day of the match is the 08:27 train from Exeter St David’s. This train travels to Birmingham New Street before you have to change to complete your journey to Northampton. This will get you into Northampton for 12:20.

Later trains will require you to change in London and use the London Underground service to get from London Paddington to London Euston station. Some routes can also require another change at Milton Keynes Central.

You can take the same route (via Birmingham New Street) back to Exeter at 18:14 which should get you back prior to 22:00 on the day of the match. The train station is 1.6 miles from the stadium which is just over a 30-minute walk. Otherwise, a taxi may be necessary to complete the journey.

Click here to find out all you need to know about visiting the PST Academy Stadium.

The total distance between St James Park and the PTS Academy Stadium is 189 miles and should take just over three hours to drive. 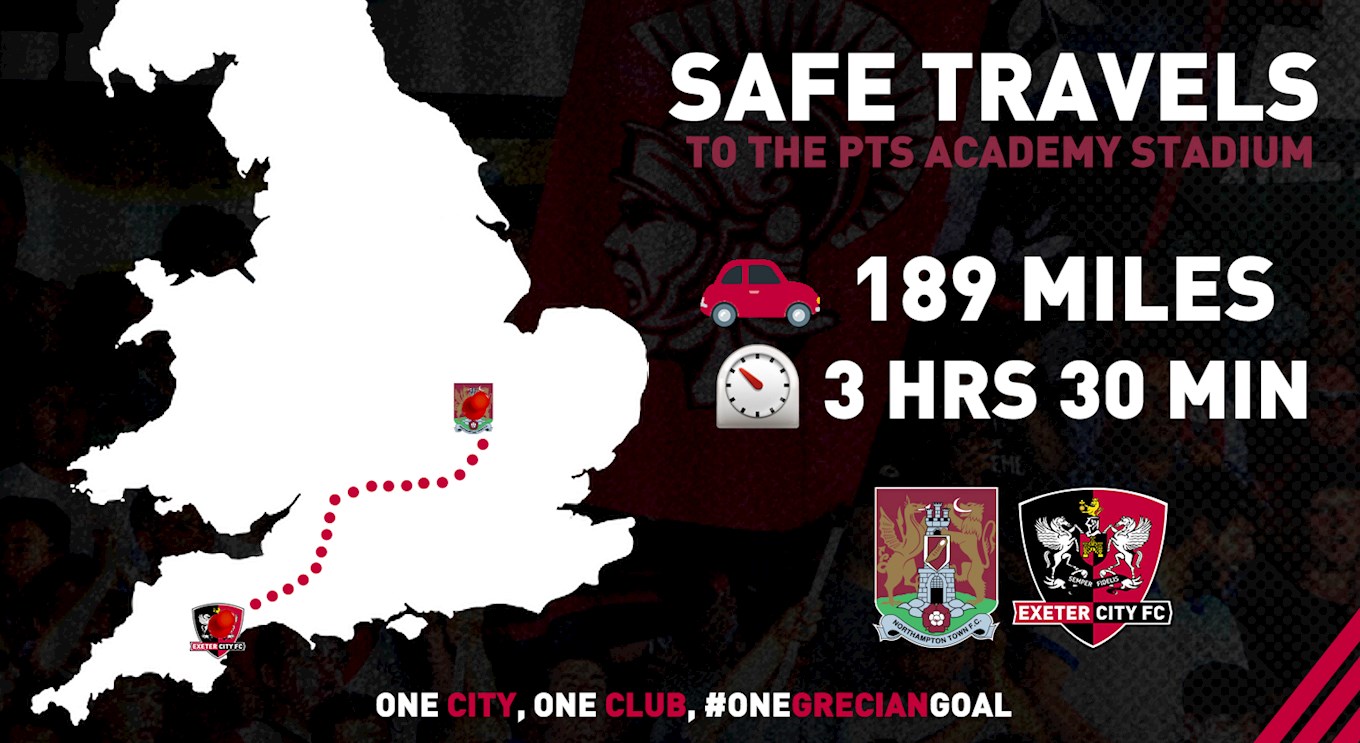 Manager Matt Taylor reverted back to the side which travelled to Macclesfield Town in City’s previous League Two encounter - but did made one change with Tom Parkes replacing Dean Moxey in central defence.

After just 54 seconds the Grecians, rather unfortunately, found themselves behind as Northampton’s Oliver latched onto a lofted ball over the top of the back three and half-volleyed past Lewis Ward into the top corner.

As City warmed into the game, a fair number of half chances came their way with Matt Jay fashioning a couple of sights on goal and Archie Collins intercepted brilliantly yet couldn’t quite capitalise on a miskick from Cobblers goalkeeper David Cornell.

Brennan Dickenson created an opportunity from left wing-back and drove a flat diagonal ball towards Ryan Bowman who had found a yard on Lloyd Jones, but the striker’s desperate lunge was millimetres away from poking the ball home.

There was some cause for amusement midway through the first half after a strong challenge inside the City half shattered the corner flag into pieces, causing a replacement to be brought on by Town’s groundsman who lapped up the attention in front of the travelling Grecians.

As play resumed, a quick goal kick put City under pressure as Nicky Adams gathered the ball and crossed perfectly to Ryan Watson, forcing Ward to be called upon to make a miraculous last gasp save to ensure City were still in the tie.

With just three minutes of normal time remaining in the first period, Collins whipped a dangerous ball into the box forcing Jordan Turnbull to nearly turn the ball into his own net - fortunately for the Cobblers his glance dribbled past the post and out for a corner.

The Grecians started the second half on the front foot with Randell Williams surging down the right flank and crossing to Bowman who couldn’t make contact on a fierce delivery.

As Northampton’s defence began to drop deeper and deeper, City began to dominate play with Nicky Ajose having an attempt on goal and Nicky Law adding some fresh impetus in midfield.

When the Cobblers did attack they came very close to doubling their lead, but for Pierce Sweeney’s intervention and then minutes later Aaron Martin importantly blocked Hoskins’ volley from the edge of the area.

However, Keith Curle’s side did end up doubling their tally in the 80th minute as Sweeney brought down Callum Morton inside the penalty area and Hoskins dispatched the resulting spot-kick to earn all three points.

Tickets are now on sale for City's trip to the PTS Academy Stadium to face Northampton Town on Saturday, February 22 in a 3pm kick-off.