Exeter City make the long trip to Carlisle United looking to continue their positive form at Brunton Park in Sky Bet League Two in a 3pm kick-off on Saturday.

The Grecians currently sit first in the league table having picked up 14 points from their first six matches. With the side on a good run, manager Matt Taylor believes that they will be put to the test when they come up against United.

He said: “We’re in good form, we’ve started the season well, but Saturday is another test of our squad and our mentality.

“Whenever you go away from home you have got to be tough and start the game well, and we know what to expect from a really good Carlisle team.”

The Grecians come into the match following their 1-0 midweek win in the Leasing.com Trophy which was preceded by an excellent win over Mansfield Town at St James Park last weekend, and Matt Taylor’s side will be looking to further their positive run.

As for the hosts, they’ve had a mixed start to their 2019/20 campaign, but recently picked up a 2-2 draw with Salford City before taking all three points away from Scunthorpe United last time out in the league. At this early stage, Carlisle come into the match in 18th place with seven points. 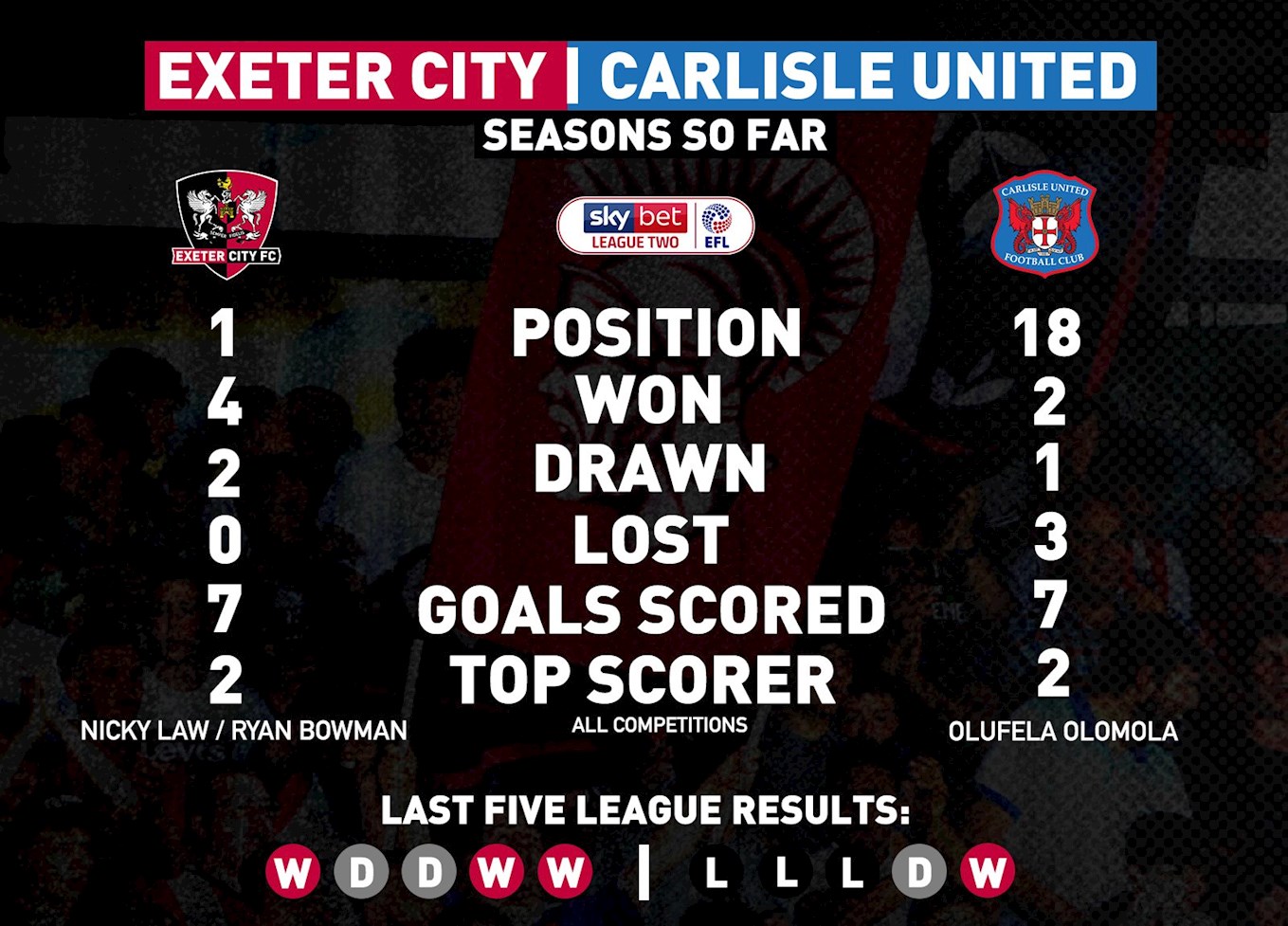 Ahead of the match, United manager Steven Pressley said: “We’ve got a lot of work ahead of us. I must say that the group have given absolutely everything, and we have to consider that last Saturday was their eighth game in 28 days.

“A lot of our players have played almost all of the minutes and it is tough. Being honest, even I was feeling the effects of it. I had two days after Saturday where I completely switched off and it was the first time in a long time that I’ve done that.”

The sides last met back in February at Brunton Park when the Grecians took away a point from Cumbria. Despite having the better of the chances in the first half and going ahead through Nicky Law’s excellent strike, Jamie Devitt levelled things with a second half free kick for the hosts.

Tickets are now on sale for City's trip to Brunton park to face Carlisle United on Saturday, September 7 in a 3pm kick-off.

Ticket prices in the Pioneer Foods Stand, Section 3 are as follows:

From Exeter take the M5 north all the way up to the M6. Continue along the motorway to the north of the country before leaving the M6 motorway at J43 and take the exit signed Carlisle A69. The blue roof of the Pioneer Foods Stand can be seen on the right-hand side, almost as soon as you leave the roundabout. Keep going straight ahead along Warwick Road (A69) for one mile. After passing through the third set of traffic lights the club shop (Blues Store) and statue of Hughie McIlmoyle on the right mark the main entrance to the ground for main stand ticket holders, directors, hospitality guests and reserved guest car parking only. There is parking available for both home and away supporters.

You can get the train from Exeter St. Davids to Carlisle, however returning to Exeter is not easy on the day due to the last train back that gets you back to Devon on the same day, leaves just after the full-time whistle and is a 1-mile walk from the ground. To get from Exeter you need to take the 07:24 train before changing at Birmingham New Street and arriving in Carlisle for 13:00.

You can fly from Exeter to Newcastle with City's main club sponsors Flybe and then get the train to Carlisle. Click here for more details.

City had a number of chances throughout, but they went ahead through Lee Martin's first half finish before Olufela Olomola levelled after the break. But City quickly hit back through Aaron Martin's first goal of the season and the win was made safe when Nicky Law finished well in stoppage time.

The Grecians made one change to the side that started the 1-0 win over Mansfield Town last time out in the league, with Law recovering from injury to slot into the City midfield.

City started brightly and had two good early chances, the first when Law dragged a shot wide before Lee Martin managed to get behind the defence and had a smart shot saved by Adam Collin.

Just a minute later, Martin would have another chance after good work from Randell Williams on the left saw him cut inside before the City number seven’s low effort was blocked by the legs of the United keeper.

On 20 minutes City continued to do well to get in behind the United back line with Law often involved. The midfielder did well to get in down the right before crossing low along the six-yard box, but Matt Taylor’s side were unable to convert.

Jack Bridge then had the home side’s first real chance when he received the ball on the edge of the City box before shooting powerfully at Lewis Ward’s goal, but the keeper collected comfortably.

But the Grecians kept knocking on the door as they searched to go ahead. Their next chance came as Williams crossed to the far post to find Law, who did well to cushion the ball into the path of Jake Taylor, but his left footed effort came back off Collin’s post as the match remained goalless.

That goal did come though, on 36 minutes when City broke through Williams and Law before the former played in Martin on the left, who curled an effort first time inside the far post as Matt Taylor’s men took a deserved lead into half-time.

Mike Jones would have the first attempt after the break following a United attack when the ball fell to him a long way from the City goal before unleashing a powerful effort which Ward managed to stop and then hold.

City were inches from doubling their lead on 50 minutes when Williams combined with Lee Martin before the ball was flashed across goal and Ryan Bowman fired an effort on target and forced Collin into another smart stop as he dived to his right to turn the ball behind.

Chances continued to follow as City kept up their impressive form as Sweeney threaded the ball inside to Taylor before his effort from the edge of the United box edged agonisingly wide as the Grecians tried to take the game away from the home side.

The game then took a twist just after the hour mark when the home side managed to draw level against the run of play. After the ball was crossed into the City box, a shot at goal was blocked up into the air before Olomola had a free header as he found the net.

But the Grecians managed to go back ahead when Aaron Martin got his first goal of the season after being found by a Law corner unmarked as he stooped to head home and make it 2-1 to City.

City would be denied once again by Collin on 76 minutes when Williams did fantastically to drive down the right and cross well for Bowman to shoot before it was blocked into the path of Lee Martin, and his powerful effort was saved on the line by the United shot stopper.

But in stoppage time the Grecians managed a third as they broke and Matt Jay threaded the ball through to Law to finish coolly to give the Grecians all three points going back to Devon.

Tickets are now on sale for City's trip to Brunton park to face Carlisle United on Saturday, September 7 in a 3pm kick-off.

Ticket prices in the Pioneer Foods Stand, Section 3 are as follows:

The coach will depart from Unit 1 nightclub at 6:00am for a fare of £45. Click here to find out more and book.