The day has finally come as the League Two seasons kicks off with supporters in the ground as we welcome Bradford City to St James Park.

After 522 days since you've been back home without restrictions, a bumper crowd is expected for the visit of the Bantams, who are expected to be in the promotion mix this season.

In order to keep everyone safe, the club has adopted a five point plan, which you can read more about here.

Going into the game, City will be without midfielder Archie Collins and defender Alex Hartridge who both picked up injuries in the final week of pre-season, but Matt Jay is in line to start his first match as new club captain.

The Grecians had a positive first few weeks of pre-season, with wins over Tiverton, Taunton, Weymouth, and Bath City and a draw with Championship side Cardiff City.

Bradford have won six of their seven pre-season matches, which included victories over Doncaster Rovers and Blackburn.

"We are looking forward to the fans being back and being in full voice," Matt said.

"There will be a full away end and I know our fans always respond well to away fans. They've been away for so long but I know they'll get behind the team."

Bradford City are amongst the bookies favourites and have strengthened well in the transfer window, something which the manager believes this should make for an entertaining contest.

"Derek [Adams] has put together a really strong team, and the work he has done in the past with other clubs will bode well for them. They are a big club and deserve to be in a much higher league."

Please purchase tickets in advance for this fixture in order to minimise queues on match day. There is now an option to have an e-ticket sent to your mobile device. To purchase tickets, please click here.

Ticket collections are open from 12pm, so please arrive early to avoid disruption.

Pay on the gate entry for the Big Bank can ONLY be purchased from Stadium Way, therefore please make sure you have bought in advance if you intend to use the Jungle Path.

Tickets will be on sale for our first away game at Leyton Orient, however these sales will cease at 2pm until after the game in order to prioritise match day itself.

The award winning Grecian returns for the new season at just £3.50.

In this edition, we talk to Matt Jay about his life in football and find out a little bit more about how our player of the year is taking to things as the new captain of our football club.

As always, there is plenty more for fans of all ages to enjoy, including our Academy Drills pull-out feature, which will again run throughout the season with the aim of providing useful and enjoyable sessions for young coaches and the players in the community.

Click here to order online or grab one at SJP on Saturday!

Park Life has returned for the new season as the Grecians kick-off the EFL Sky Bet league Two 21/22 season against Bradford City on Saturday.

The show features an in-depth look at Saturday's match with interviews with Matt Taylor and Sam Nombe, a look at our summer signings, a preview on the Bantams and much more.

Take a watch below:

A second half resurgence from Exeter earned a valuable three points, with Matt Jay’s 79th minute penalty finishing off proceedings. Crankshaw had put Bradford in command on the stroke of half time after Pierce Sweeney cancelled out Vernam’s early strike. Ryan Bowman was also on the scoresheet for the Grecians.

5,605 fans returned to St James Park to see Exeter City open the season with an entertaining 0-0 draw with a battling Bradford City.

Cameron Dawson marked his debut with a series of sensational saves to deny the ever-dangerous Lee Angol and earn a deserved Man of the Match.

Timothee Dieng, Jack Sparkes and Matt Jay tested Richard O’Donnell in the away side’s goal and Nigel Atangana went closest for the Grecians late on, but neither side could quite find the finishing touch.

After a moment’s applause for legendary Manager Terry Cooper and Life-long City fan and East-Devon Grecian John Lee, the 2021/22 season kicked off.

The visitors had the first sniff of goal. Lee Angol sprung the Grecians high line and teased a ball across the face of the Exeter box, though there was no one in in blue to prod home.

Jack Sparkes sliced way wide from distance soon after before almost turning provider. A looped ball from the Number 3 fell awkwardly for new club captain Matt Jay to blaze over.

Tim Dieng found himself in the book after twenty minutes. The debutant halted Angol baring down on goal. From the free kick, Bantam’s skipper Niall Canavan headed the ball down just to find Pierce Sweeney lurking on the line to head clear.

Midway through the first half, Cameron Dawson announced himself to the Exeter City faithful with the most outrageous double save.

Callum Cooke feinted on the edge of the Grecians’ box. His left foot effort was stopped by Dawson’s left paw and Agol looked destined to net in the rebound, just for the Sheffield Wednesday loanee to scramble across and tip over.

Angol nearly got through on goal on 35 mins only for Sweeney to deny the striker’s final touch with a wonderful sliding block.

With seconds to go in the half, Sparkes fizzed the Bradford ‘keeper’s gloves before Nombe fired high.

In the opening exchanges of the second half Callum Cooke hooked a free kick into the crowd as the Bantam’s looked to set the tone for the next 45 minutes.

Though Exeter responded with Timothee Dieng forcing the opposition shot stopper down to his left for a comfortable save.

Bradford piled on the pressure. Half time substitute Charles Vernham first coming close, but the visitors were only limited to pot shots from range.

Dieng once again was thrusted in the heart of the action. The ball fell kindly for the debutant whose 30-yard drive stung the hands of O’Donnell.

With 20 minutes left, Sparkes again troubled the Bradford back line with a powerful strike the Bradford keeper kept out, but from the counter- attack the Yorkshire side looked sure to break the deadlock, had it not been for a poor first touch from Striker Angol.

Dawson soon reacted well to rush down Alex Gillead’s close range chance before the Grecians had a glorious chance to snatch the points.

With seconds of normal time to go, a seemingly tame corner from MJ bounced right across the Bantam’s six-yard box. Nigel Atangana only had to connect with a toenail but somehow the chance evaded him.

A League Cup encounter with Wycombe follows on Tuesday evening before the league trip to the capital and Leyton Orient on Saturday.

Tickets are on sale for City's 21/22 EFL Sky Bet League Two season opener with Bradford City on Saturday, August 7 and we can't wait to welcome you back!

It will have been 522 days since we’ve been able to welcome you all back to St James Park, to find out what to expect on your return to the stadium, please click here.

Ticket prices for the match are as follows: 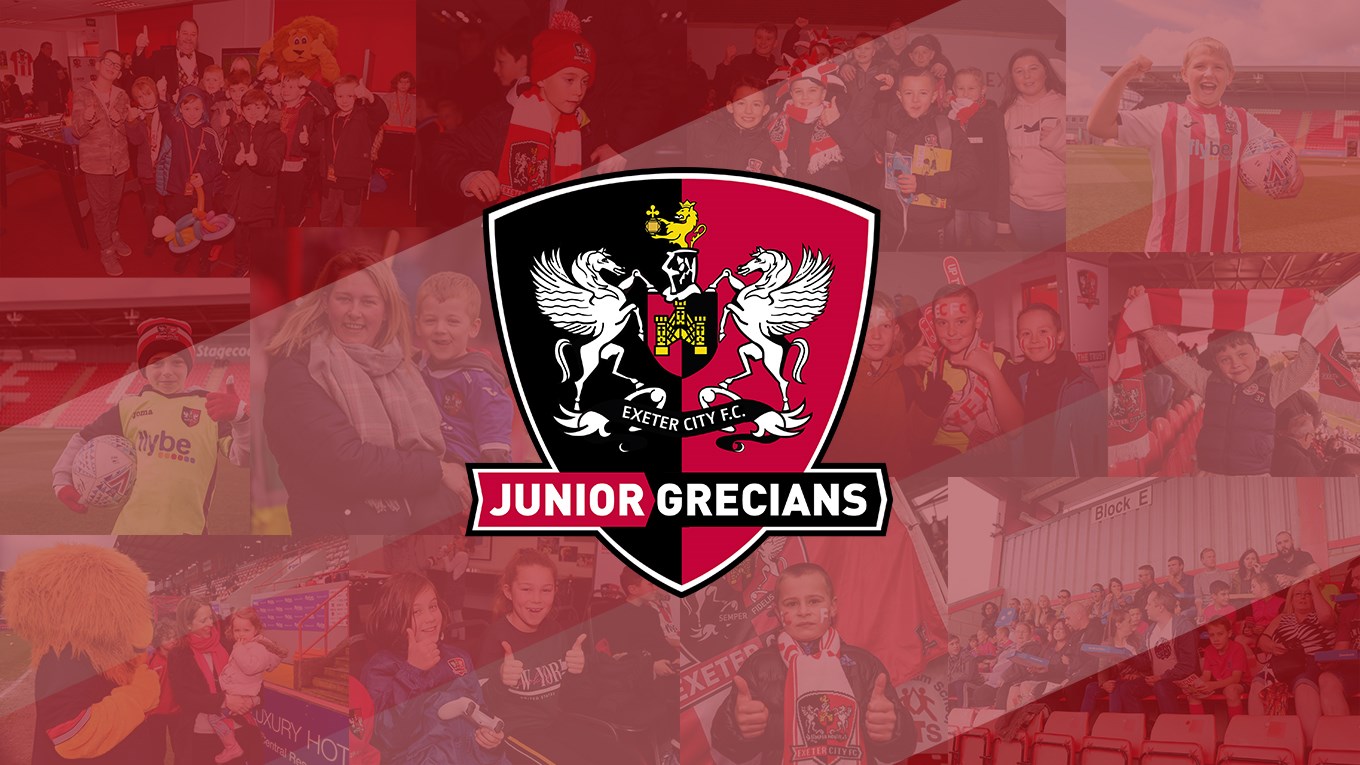 Fancy watching the match in style? Either for corporate or personal use, our matchday hospitality is one of the best ways to enjoy the ECFC matchday experience. 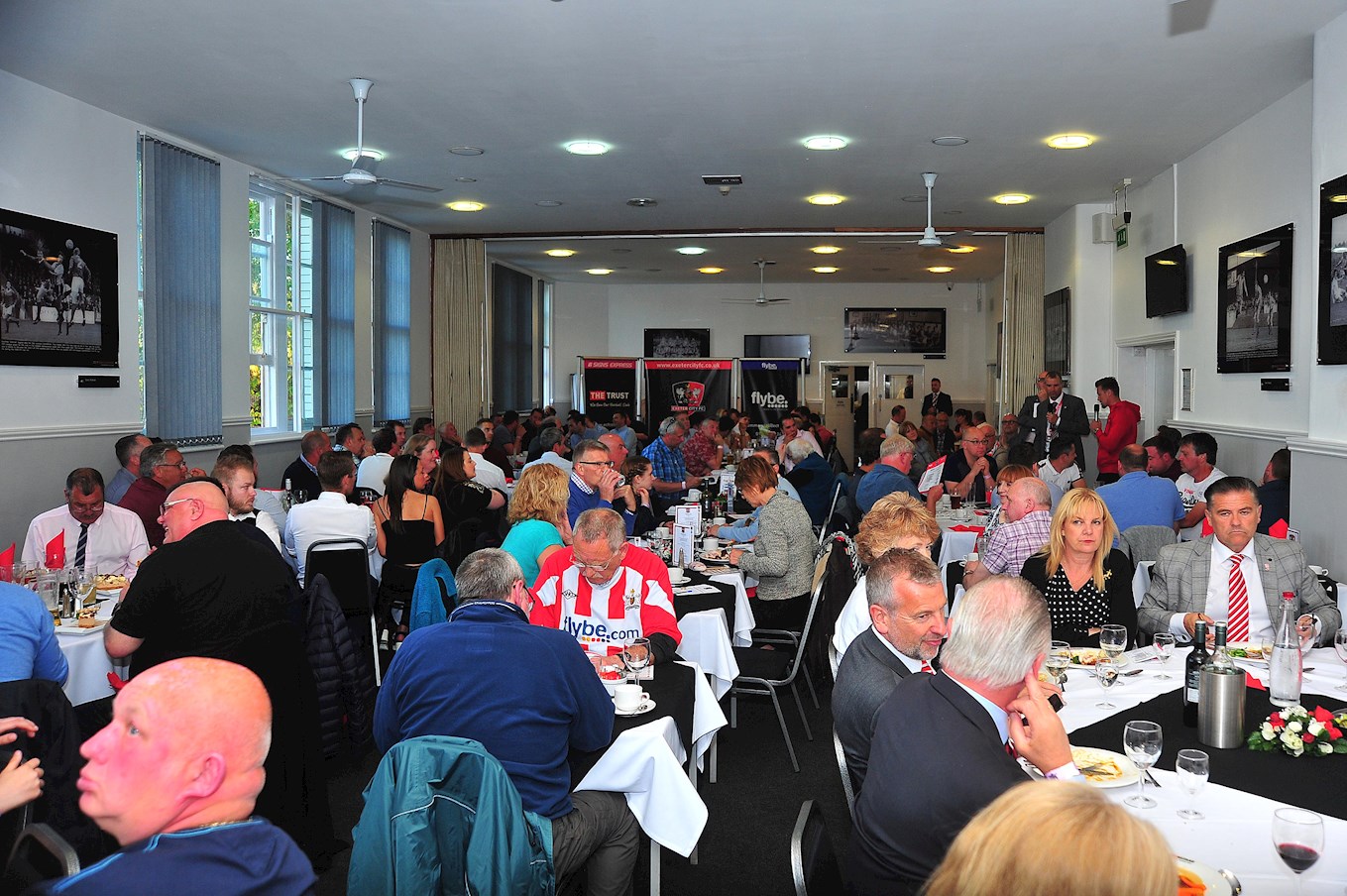 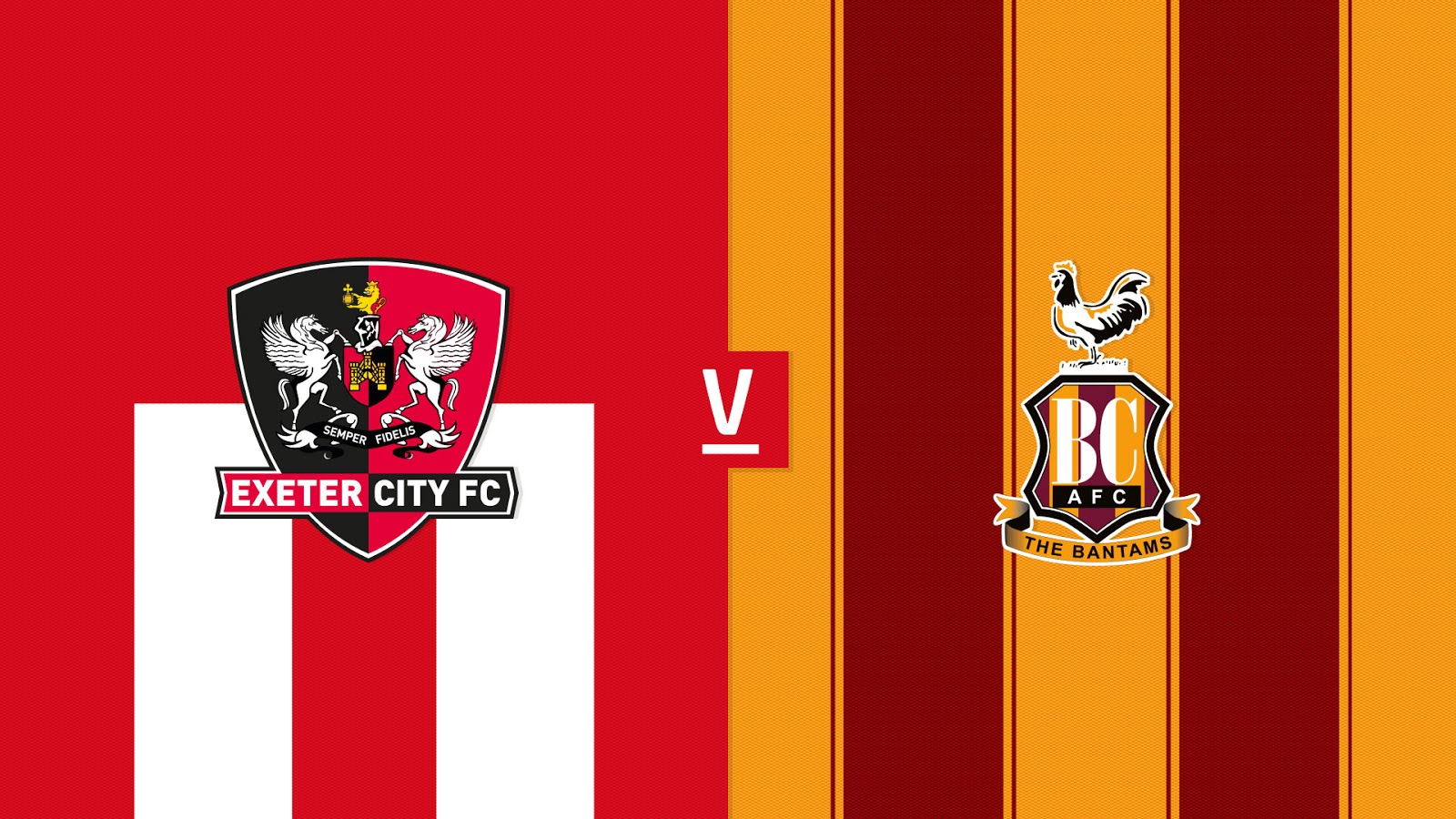 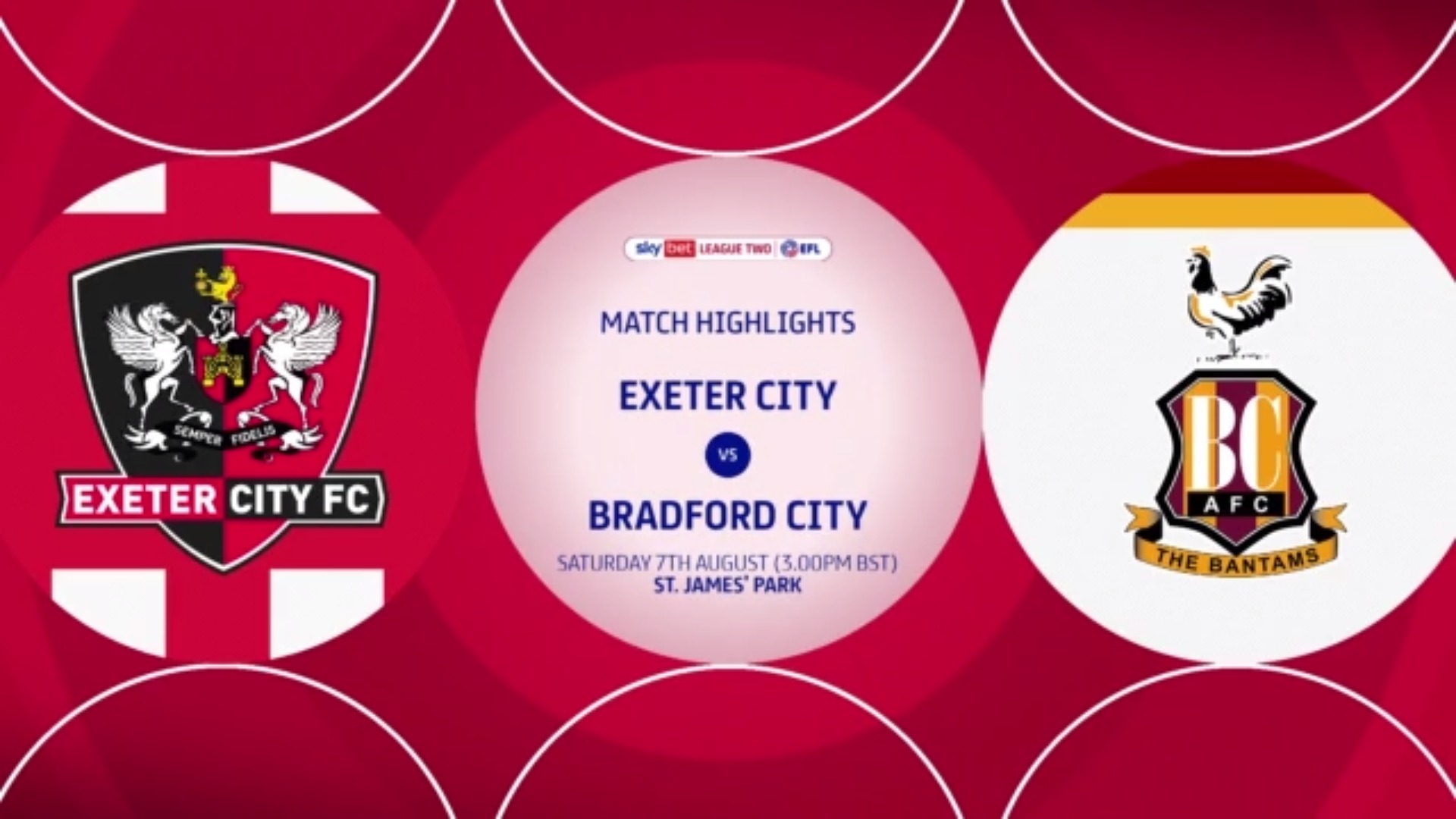 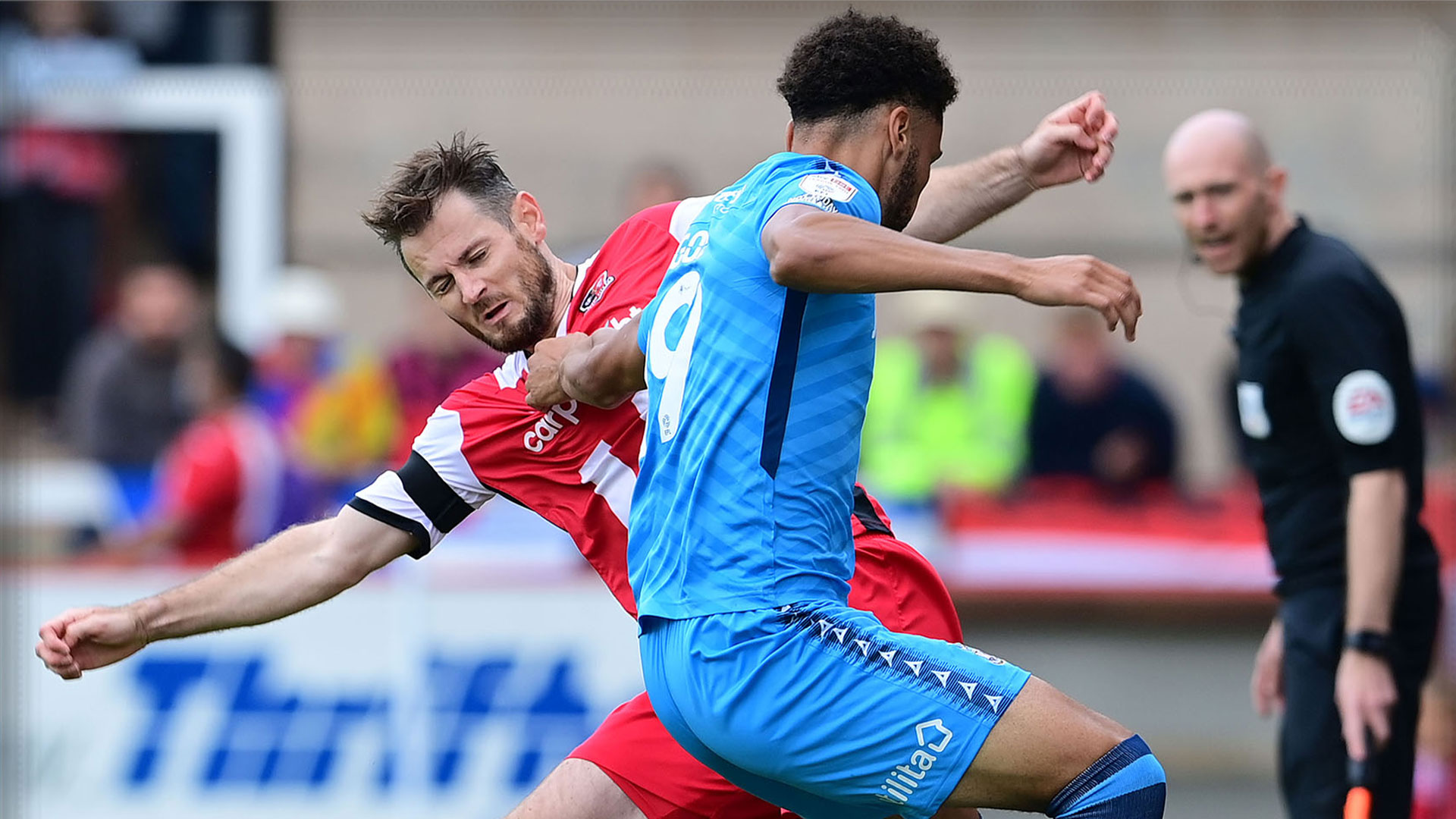