Following the release of the 2020/21 Sky Bet League Two fixture, Exeter City will open the season with an away match against Salford City.

We've decided to take a look at some of the key parts of the season from the local matches, to the new teams to visit to the Christmas schedule. We are aware that the season will start off behind closed doors and then, in a reduced capacity format because of Covid-19 restrictions, but we are very much looking forward to welcoming fans back through the turnstiles at St James Park.

Exeter City will open the Sky Bet League Two season up away at Salford City on Saturday, September 12. The Grecians won on their last visit to Moor Lane thanks to a goal from Ryan Bowman, but the Greater Manchester side, who are part owned by a number of the Class of 92 Manchester United side, have strengthened heavily in the summer and will be among the favourites to get promoted from Sky Bet League Two this season. Exeter City will close the season at home to Barrow. It is an odd twist of fate for Barrow as they last visited St James Park on the last day of 1971/1972 season when they lost 7-1 and exited the Football League after finishing third from bottom and failing in their re-election process. It looks to be a tough opening month for the Grecians as well. We face Port Vale in our second match and then travel to Mansfield, who have also strengthened heavily in the summer.

Exeter City's first local match comes on Saturday, December 5, when we travel to Cheltenham Town. Then over the Christmas period we host Forest Green Rovers on Boxing Day - hopefully in less rainier conditions than the last time we played Mark Cooper's side on that day - and then travel to Newport on December 29. The last time we face Newport County AFC away between Christmas and New Year, Ollie Watkins bagged a hat-trick as we ran out 4-1 winners at Rodney Parade. The return match away at Forest Green comes on Tuesday, April 20, while four days later we will host Newport County AFC at St James Park. The match at home to Cheltenham Town will be played on Saturday, March 13.

Christmas has been relatively kind to us this season, with no long trip to Colchester United scheduled in-between December 25 and New Year's Day. We host Forest Green Rovers on Boxing Day and then travel the relatively short distance to Rodney Parade to take on Newport County AFC on Tuesday, December 29. Easter sees us travel to Vale Park on Good Friday, before hosting Mansfield Town at St James Park on Easter Monday.

Apart from the games over the festive periods the midweek away matches look horrendous in terms of journey times. We have to travel to Morecambe (November 3), Leyton Orient (October 27), Grimsby Town (December 1), Colchester United (February 23) and Scunthorpe United (March 9) all on Tuesday nights. The only short distance midweek game is at the New Lawn on Tuesday, April 20. We also have three Tuesday night home fixtures in Sky Bet League Two, against Crawley Town (October 20), Harrogate Town (December 15), Morecambe (January 26).

January will be a tough month for the travelling Grecians as we play Barrow (January 2), Harrogate Town (January 16) and Carlisle United (January 30). The good thing is all those games will be played on a Saturday and will give our fans chance to stay over at explore some of the nicest parts of the UK - aside from Devon of course – over the weekends. A lot of the other long trips: Morecambe, Scunthorpe and Colchester, are going to be on a Tuesday night causing all sorts of problems for supporters wishing to go to attend those games. 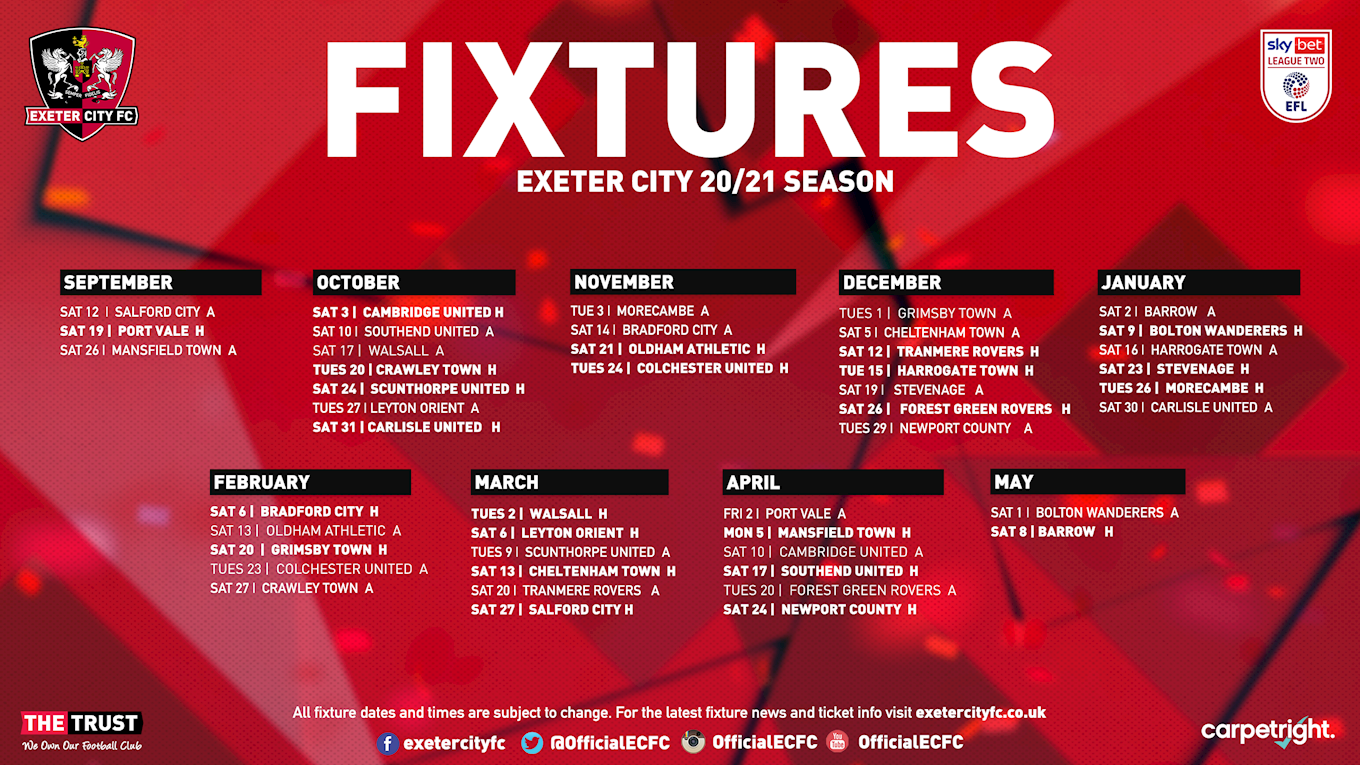